I seem to have a type of spring-blooming flower.  I wasn't intentional about this when I've planted over the years, but seeing them all together makes me so happy. See if you can guess by the photos below: 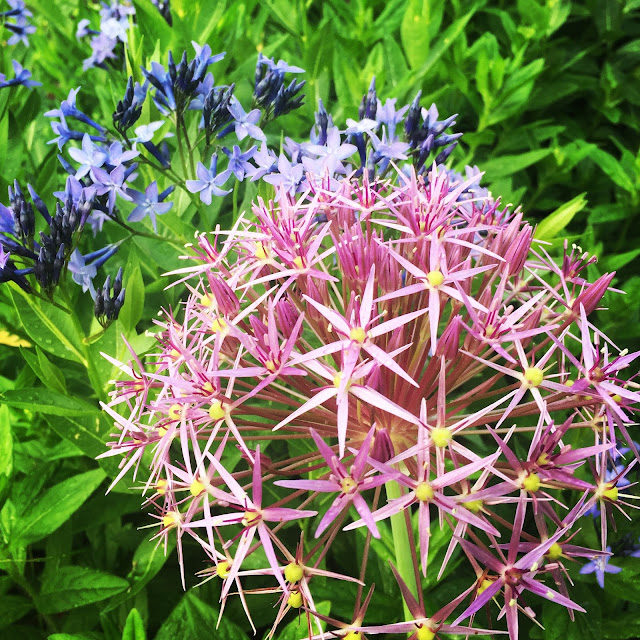 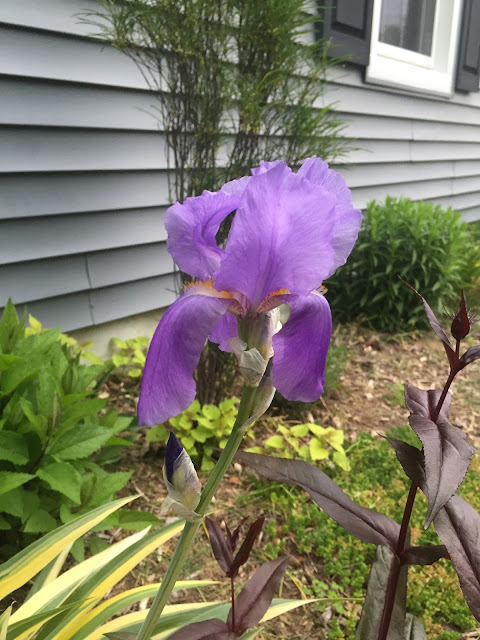 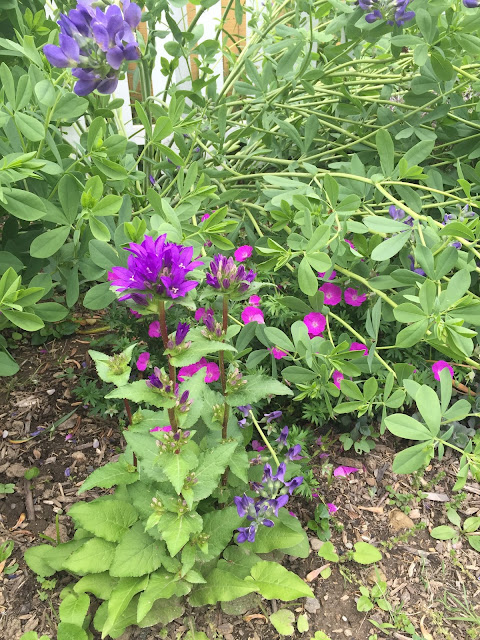 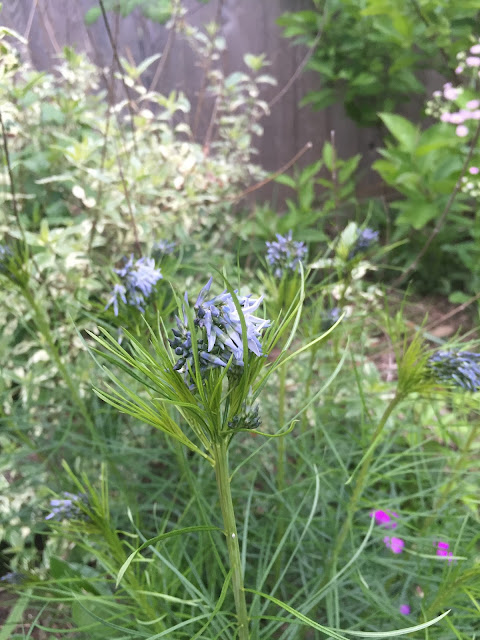 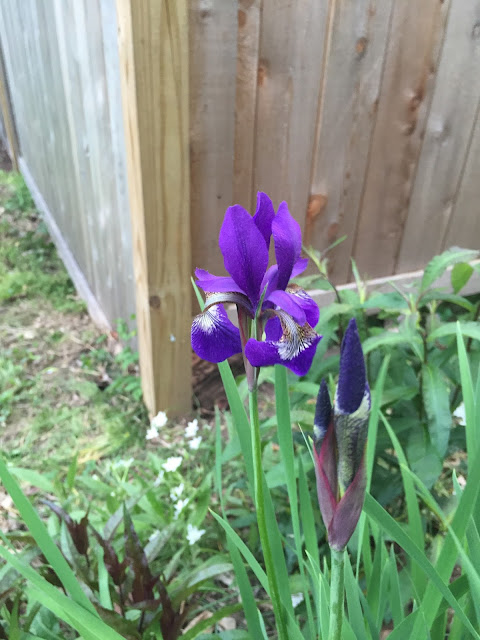 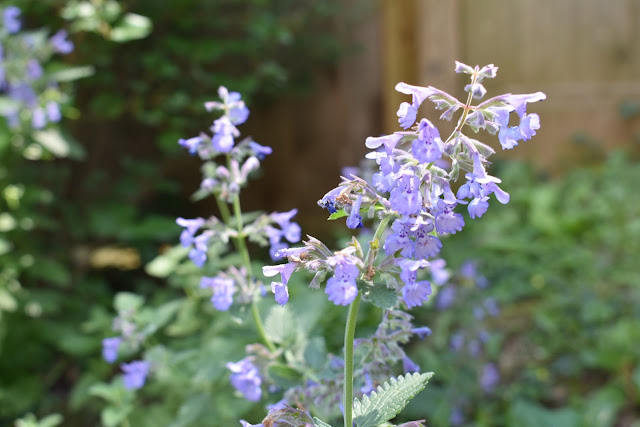 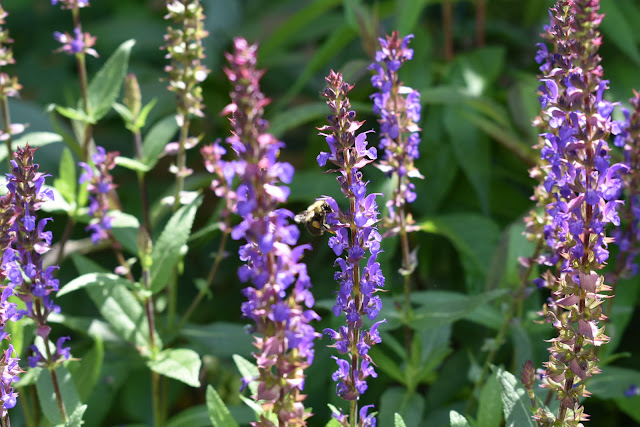 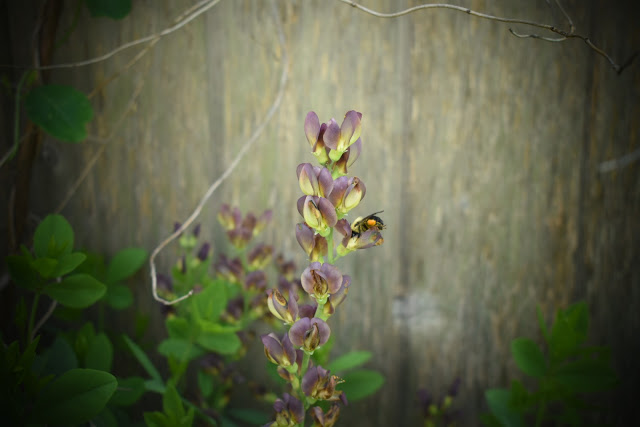 Do you have a type of spring-blooming flower?

I'm starting to sound like a broken record - strange weather this winter meant strange bloom times for the garden. I'm afraid that this is the new normal.

My creeping phlox started blooming the last week of March. It usually blooms in May.

February was warm this year and then March was cold. Some of my tulips and daffodils that had buds on them when the cold weather hit came out a little wonky. 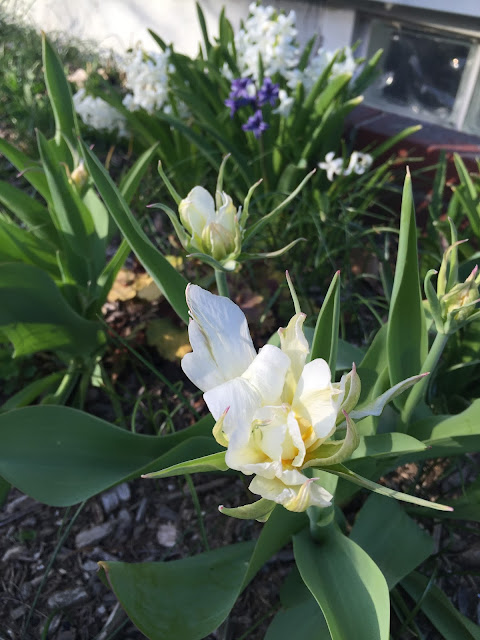 But these late-blooming daffodils made it and look lovely. 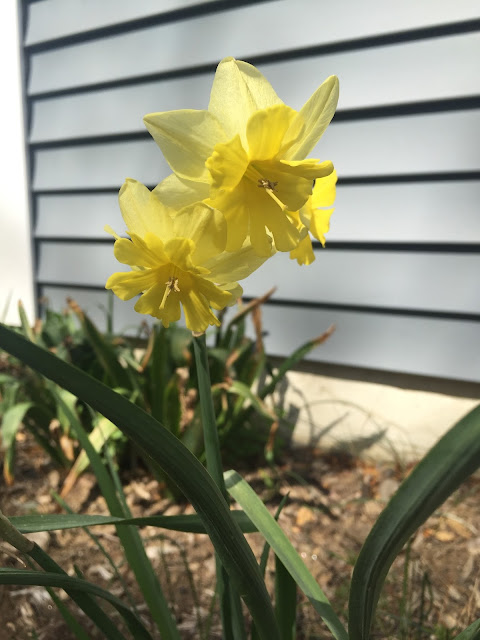 My eastern redbud, also known as the slowest developing tree in Philadelphia, had more blooms on it this year. Last year it had four. This year half of the tree was covered. I'm hopeful that next year we'll see the whole tree in bloom.

One of my peonies is already ready to bloom. 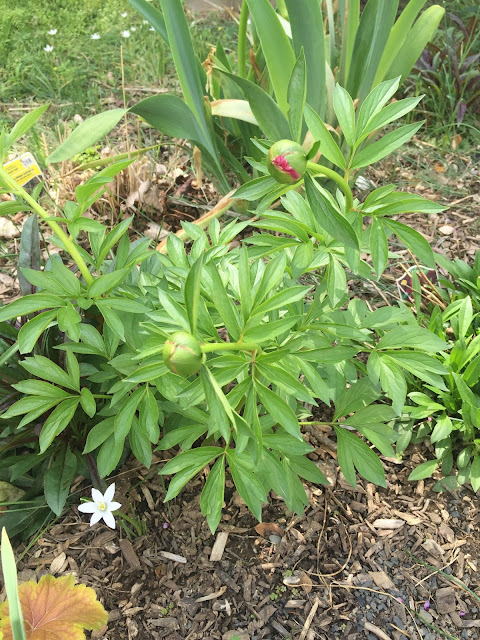 My zizia aurea is blooming for the first time. 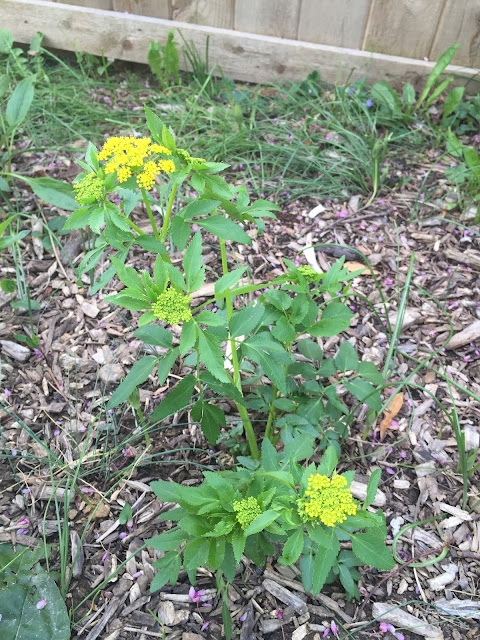 I was certain my lilac bush was not blooming this year because of the warm-cold-warm cycle. It budded in late February/early March and has not done anything since then. Today, I noticed one of the buds opened so I think all systems are go. 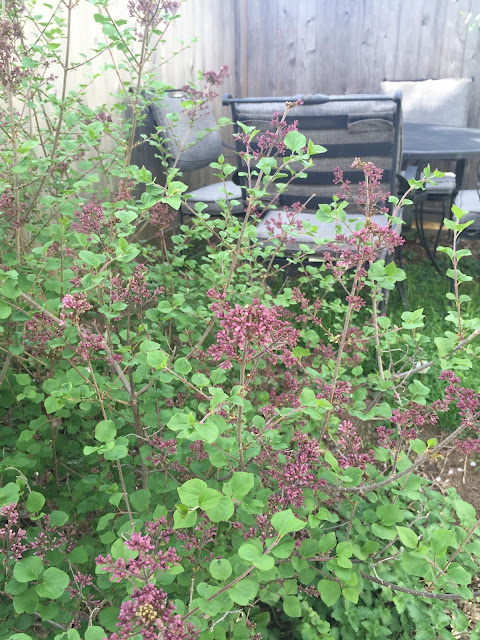 I love spring, but I'm not pleased with the drama that keeps coming with it. I'm looking forward to the more stable days of May.
Posted by Kathryn at 3:56 PM 4 comments:

The anxiety of early blooms

February 2017 was warm. We had about ten days where the temperatures were in the high 60s to 70s (our average historical temperature in Philadelphia is 44 degrees). Cherry trees erupted in blooms and I saw a dogwood already flowering by my bus stop. Bulbs got the go-ahead to erupt out of the ground and some started to bloom. Up and down my block, daffodils burst into flower last weekend.

I had a few early bloomers. I watched them carefully, and was then dismayed when they all (including the hundreds in other neighbors' yards) flopped over after one cold night. I kept expecting them to right themselves but they haven't yet. So, I cut mine and brought them indoors. 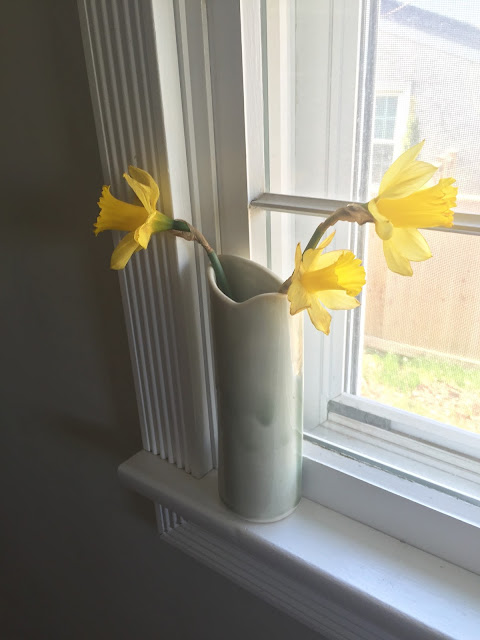 There are many more that are thisclose to blooming. With freezing temperatures and snow/rain forecast for the weekend, I want to run out and protect them. If the internet is right, though, they should be okay on their own. I hope.

Do you have anything blooming now that is really early for your garden?
Posted by Kathryn at 10:20 AM 2 comments:

In what is becoming an annual tradition, I'm recording the first crocus bloom of the year. I noticed this on Monday. It's roughly the same time the first one appeared last year, and a month earlier than the first crocus of 2015. 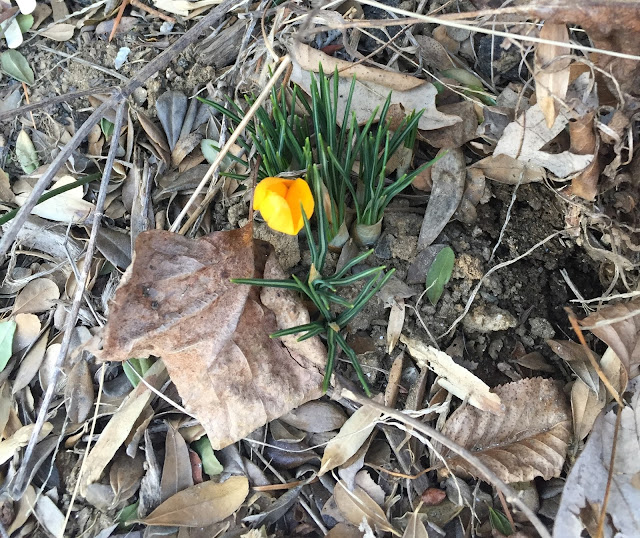 It would be nice if this weather stuck around, but I'm sure we'll have freezing rain, hail, and diving temps again during a fickle spring. I'm also worried about the pest population this year, as it hasn't really been cold enough to kill the bad guys.

Trying to get my groove back

2016, I wasn't sorry to see you go. It was a tough year for many, myself included, and for a variety of reasons. I started a hundred blog posts in my head and never put any of them to paper the keyboard. I still puttered in the garden but not as much. I made a thousand excuses for why I'd rather sit inside and play on my virtual farm game (seriously). 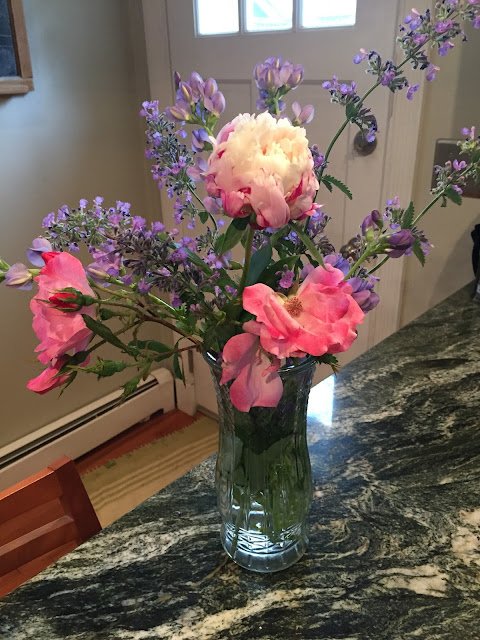 I lost "it". I lost a lot of the joy I get from gardening. 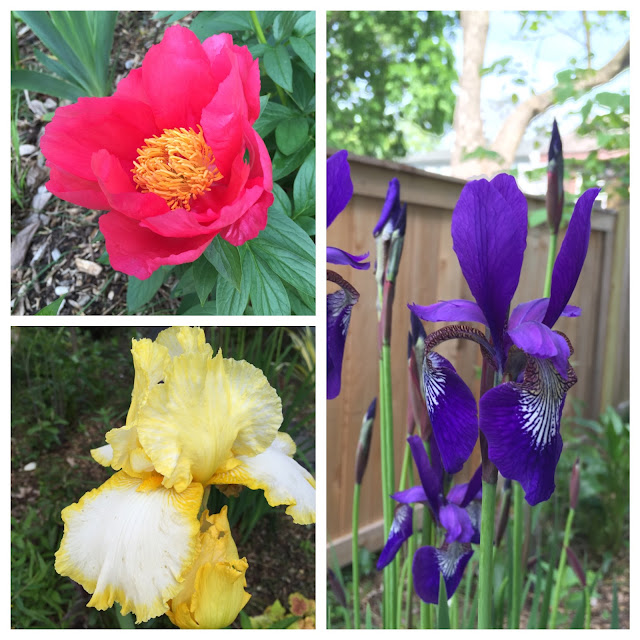 I saw weeds and felt humidity and was annoyed that the garden is not the way I want it to look in my head, and yet I didn't want to put the work in to make it that way.

And yet, the garden does what it does. Flowers keep blooming, plants keep growing. It's amazing, really. You don't feel like doing much and yet you're rewarded by so much beauty.


There are always lessons to be learned for a control freak like me. Gardening is an exercise in patience and letting go, as so often things don't go as planned. But it's often the unplanned that is the most rewarding.


I'll sit here in the winter and plan for spring. I'll order my seeds, get inspiration from magazines and blogs, and try to make a plan, though I know that so much in 2017 will not go as planned, even outside my garden. Most of all, I want to get my groove back.

Early summer on the Pharm

Two years ago, I ripped up some of the grass in my front yard to create a front yard vegetable garden (aka, "The Pharm"). I had some good successes with the plants (see this post) but couldn't really conceptualize a design.


This winter, after my dead tree and very-much-alive forsythia were chopped down, I had a blank slate. After years of debating, thinking, and not making a decision, I just drew a line in the dirt with a stick and voila! I had my layout.

(For reference: The sidewalk and street are at the top of the photo above. Dr. Neighbor's driveway is to the right.)

When I was starting my seeds in early spring, I had visions of abundance. I'd donate to the local food pantry! I'd eat super local! I'd have fresh tomatoes all day, every day! My tomato seedlings were SO big (the cherry tomatoes in particular) that I planted them outside the last week of April. My grow lights simply couldn't accommodate them any more. While I was at it, I also planted my zucchini and butternut squash seedlings outside.

And then it rained for a week and a half. My cherry tomatoes survived but everything else disintegrated. I planted an emergency second set of tomatoes (Amish Paste and Bonnie Best) indoors.

I'd also direct sowed Swiss chard, spinach, kale, lettuce, and sugar snap peas according to the seed package timetable. The Swiss chard below is the only plant to emerge after three separate seed sowings. 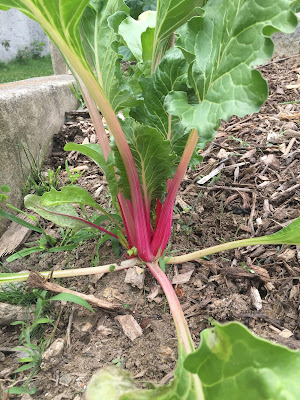 I had a fairly decent showing of sugar snap peas. The spinach bolted too quickly. The arugula always does really well. The kale did not grow at all, though I found two random tiny plants this week that must have formed when some seeds flew out of my hand.

One zucchini plant survived the deluge of rain and cold temperatures. I direct sowed some more and the first round produced nothing. The second round produced a number of plants so I'm keeping my fingers crossed.


The butternut squash seemed stunted for two months, but they just flowered and the vines are starting to grow.

The bush beans I direct sowed are doing fantastically. I just harvested about a pound of beans and more are growing.


And the emergency planting of tomatoes? Everything is growing and growing well. Some are just starting to flower, so I'm hopeful that I'll have the fresh tomatoes I dream about all winter.


Next year, I'll start my seedlings inside a few weeks later than usual so that I can plant them outside around May 15 when I'm supposed to. I'm still not sure why my direct-sowed greens didn't grow. Is it my (clay) soil? Did I plant them at the wrong depth? Did I skimp on the water? I'll try again in the fall and see if I have any better results.

While I don't have quite the abundance I was hoping for, it's a good start with the new layout. I really enjoy my daily walking tour through the Pharm, especially when it means I get to pluck and eat a fresh bean or leaf of arugula!
Posted by Kathryn at 3:50 PM 6 comments:

The strange weather continues. We had almost a week and a half of rain to start off the month of May. This weekend was the first sunny and warm weekend we've had (though today is cold, gray, and windy), so I was out in the garden in full force doing the usual spring chores but also preparing for things to look presentable for Neighbor M's yearly "Great Divide" plant swap party. Said party starts in 45 minutes so without further ado, I bring you what is blooming in my city garden!

The Front Yard
The flowers here seem to about two weeks ahead of where they were at this time last year. I'm not sure why it's just the front yard that's doing this (everything else is pretty much on the same schedule).

Thanks to May Dreams for hosting!

After a pretty mild winter, one in which we didn't have a lot of snow and it was most certainly NOT the third coldest winter on record (like last year), the week of March 7 brought us 70-degree temperatures here in Philly. I know it was that week because I was on Spring Break from work and I was puttering outside in the garden for much of the week. 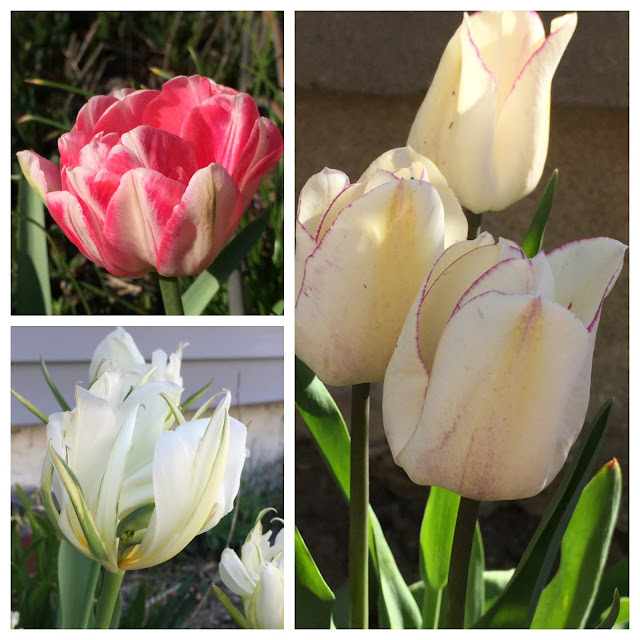 And then the first day of spring came, and we have since had three freeze warnings during which I first covered my fledgling sugar snap pea seedlings, and then I gave up. 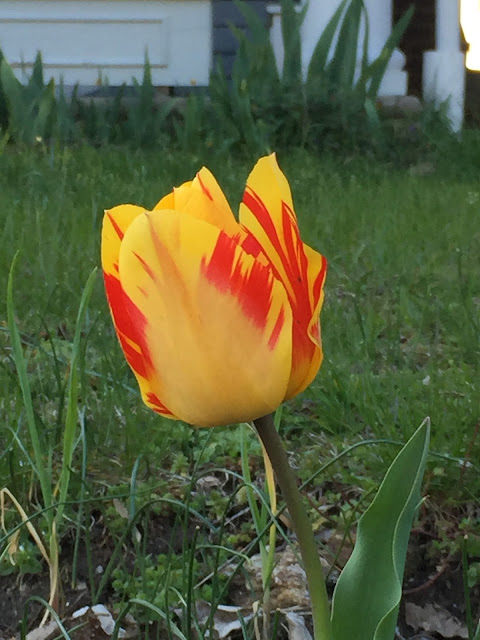 We also had snow last weekend. I happened to be in Lancaster County, PA (Pennsylvania Dutch Country), where they call a springtime snow an "onion snow". The snow was really wet, and then we had another freeze that night so some emerging plants like my bleeding heart (below) were damaged.

For the second year in a row, my Eastern Redbud has bloomed. Last year, I had precisely two flowers on the entire tree. This year, I'm pleased with an entire branch of flowers. The tree heard me threatening to chop it down two years ago and is finally performing. 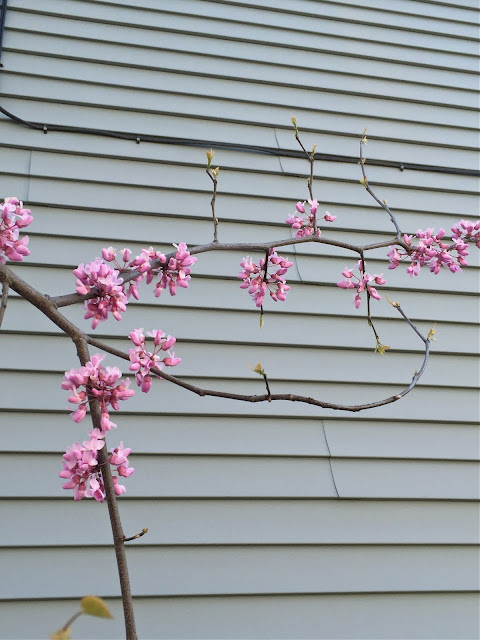 Completely unfazed by the strange weather, my creeping phlox is in full bloom and has been for a week or two. It's an entire month early, by the way, as it's usually in full bloom in early- to mid-May. 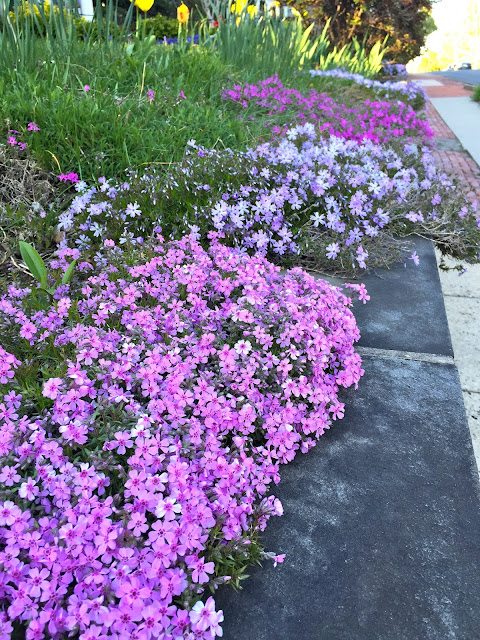 My Kerria japonica is also about a month early. It's right outside of my back door so it's nice to see. 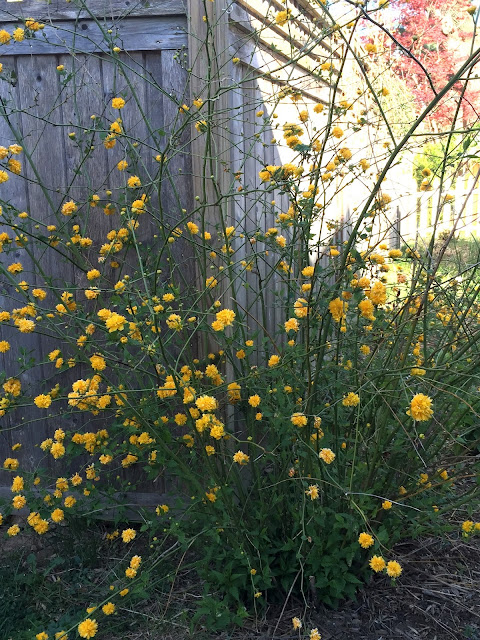 I was able to move my pot of strawberries to the covered porch during the freeze warnings, so it's doing just fine now. The chives behind it in the photo below looked pretty dead during the "onion snow" (no pun intended) but have since rebounded. 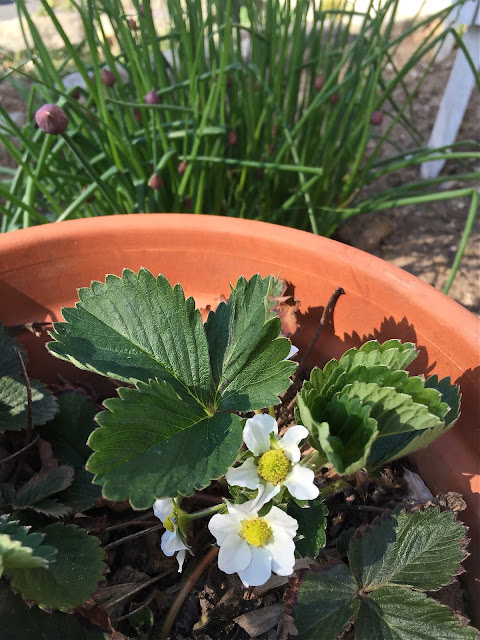 We're less than a third of the way through 2016 and it's already been a very strange year as far as the weather and garden are concerned. How about where you live? Is it business as usual or are you also experiencing a strange spring?

Hi, I'm Kathryn. I garden in Zone 7a in Philadelphia, PA, where I'm trying to make my enormous perennial garden dreams happen on a tiny city lot.
Before 2012, I used this space to keep track of photos of my garden while maintaining a handwritten journal. Since 2012, I've been using it as that but also as a garden blog. You'll be able to tell the difference in posts.
Also in 2012, my back and side yards underwent a total transformation. I found out I'd been planting on someone else's property (it wasn't really mine) for 7 years. New homes went up and half of my garden was ripped out. I had to start all over.